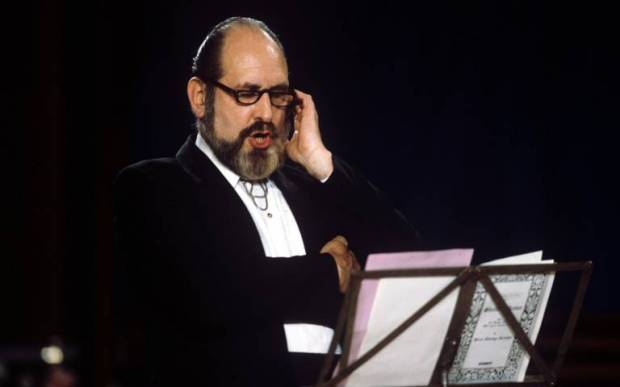 With great sadness, we wish to commemorate our Honorary President Raimund Herincx who left this world on 10th February aged 90. Raimund became our President in 1997 at the invitation of Brendan Ashe who was our Musical Director at that time and Raimund has remained so until the present; he sang with us in two concerts. The first was Carmina Burana on 28th November 1998 in St Mary’s Church, Wedmore when he sang “The Dying Swan Song” “Olim lacus colueram” in his falsetto range. The second occasion was our Millennium Concert on 29th April 2000 in Wells Cathedral when he sang the Bass solos in “Verdi’s Requiem”. Anyone that heard his bass voice entry “Requiem Aeternam” in the “Lux Aeterna” that day will know what power he had!

The entry below is his Obituary in the Daily Telegraph:

Obituaries
Raimund Herincx
Operatic bass-baritone who excelled in Wagnerian roles and championed the works of Tippett.

RAIMUND HERINCX was one of the great Wagnerian opera singers of the 1960s and 1970s.

A tall, bearded, Falstaffian figure, he had a commanding presence and a voice of depth and authority that could seemingly carry the length of a football pitch with minimal effort. He was in particular demand playing characters of a menacing, sinister or ruthless bent, such as Baron Scarpia in Puccini’s Tosca or the title role in Boito’s Mefistofele.

As Wotan in Wagner’s Die Walküre he could out-sing a bank of roaring tubas, joking that even if their number increased he would still be heard over them. His first appearance in the role was with English National Opera under Charles Mackerras in 1976, after which Opera magazine described him as “the discovery” of the Ring Cycle, adding that his voice was that of “a true heroic bass-baritone, deployed with unstinting generosity and deep feeling”.

Raimund Frederick Herincx was born in Kensington on August 23 1927, one of three sons of Florent, a Flemish military tailor, and his wife Marie. His paternal grandmother was of Romany stock and Herincx would claim that he declined to sing at Bayreuth, once the operatic citadel of the Nazis, “because of what Goebbels did to her”.

Young Raimund’s early years were spent in Flanders, but he was educated at St Mary Abbots School, London, and Thames Valley Grammar School, Twickenham, where his talent for singing was discovered. Ralph Vaughan Williams was impressed after hearing him perform in a music festival in London.

He joined the Life Guards in 1944, but was wounded in northern France. He remained in the Army, taking a degree in Chemistry at Birkbeck College, but the combination of ruinous mess bills and distaste for chemical warfare projects meant that demobilisation in 1948 could not come soon enough.

He studied singing in Belgium, making his debut there in The Marriage of Figaro in 1950, before taking private lessons in London. At Christmas 1955 he appeared in Beauty and the Beast at Richmond Theatre, though one critic observed that his “resonant baritone was somewhat above ordinary pantomime standards”.

Two years later he made his British opera debut in Mefistofele with Welsh National Opera. That year he joined Sadler’s Wells, appearing as a charming Count Almaviva in Figaro. His first Wagner role was Wolfram in Tannhäuser in December 1959, conducted by Colin Davis, and the following year he made the first of 34 appearances at the BBC Proms, taking part in Stravinsky’s Oedipus Rex conducted by Malcolm Sargent. Herincx was a great champion of Michael Tippett, making his first appearance at Covent Garden in 1968 as King Fisher in The Midsummer Marriage; two years later he created the role of Faber in Tippett’s new opera The Knot Garden, directed by Peter Hall. He was also involved in John Tavener’s dramatic cantata The Whale and in 1972 sang the White Abbot in Peter Maxwell Davies’s opera Taverner. During this time he was a regular soloist with choral societies around the country.

At the height of his career Herincx became caught up in John Ogdon’s descent into mental illness. The pianist, with whom he shared an agent, began to perceive him as a controlling figure, even suggesting that the singer was altering his scores in an attempt to derail his career. If Herincx was guilty of anything, it was of getting out of his depth in coming to the aid of a man in need of professional help.

In retirement Herincx, a connoisseur of fine wine, and his wife bought Wraxall vineyard near Shepton Mallet in Somerset, although the physical labour soon became too arduous. When the Glastonbury Arts Festival, not to be confused with the rock event, learnt of his proximity they persuaded him to take part in a 1996 staging of Rutland Boughton’s long-forgotten opera The Immortal Hour.

About 18 years ago Herincx settled in Bath, where he could be heard reading lessons in Christmas carol services. To his family’s amusement he campaigned in vain to have the tomb of Venanzio Rauzzini, the famous castrato and friend of Haydn who died in the city in 1810, moved from an obscure nook in Bath Abbey into a more central location. When the Three Tenors sang in Bath in August 2003 he was greeted as a long-lost friend by Placido Domingo and Luciano Pavarotti, the three of them spending a long evening reminiscing about operatic triumphs of the past.

For 30 years Herincx lectured and taught at the North East of Scotland Music School, part of Aberdeen University. In the week before his death he was listening to his acclaimed 1967 recording of Handel’s Messiah with Janet Baker conducted by Mackerras, one of the first to reconstruct the style of performance that the composer might have known.

In 1954 Raimund Herincx married Astra Blair, also an opera singer and later a musicians’ agent. She survives him with two daughters and a son.